I am inclined to think that I am not the right person to write a summary of what is presented in this book. Having emphasized an open-ended approach to the topic via both the form and the content, the many conclusions to come from the book belong to readers. To this effect, I look forward to the future when others will bring the book back to me as my past now seen through their eyes.

Instead of a proper conclusion, then, this section is an afterword that highlights the effects of three base presumptions signposted in the introduction. First, we should understand Islam as a matter of naming rather than substance. Second, in sociohistorical terms, Islam should be seen as an object created and used by Muslims and non-Muslims alike such that confessional positionality is immaterial for analytical purposes. And third, in the context of conceptualizing time, freeing ourselves from the distinction between primary and secondary sources is a necessary and generative step. 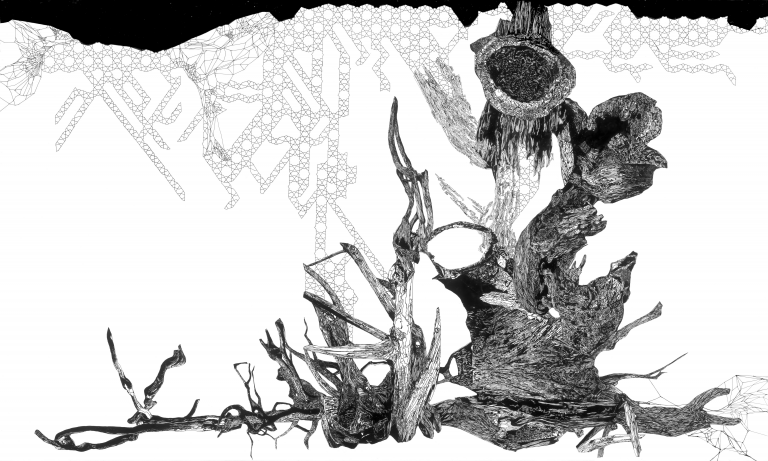 Sarah Ahmad, Fractured Cosmos IV. Organic and geometric patterns intermingle to create an unbounded world constantly in motion without a fully predictable trajectory. This artwork captures the conceptual basis for how Islam appears to me when refracted through issues related to time. Source 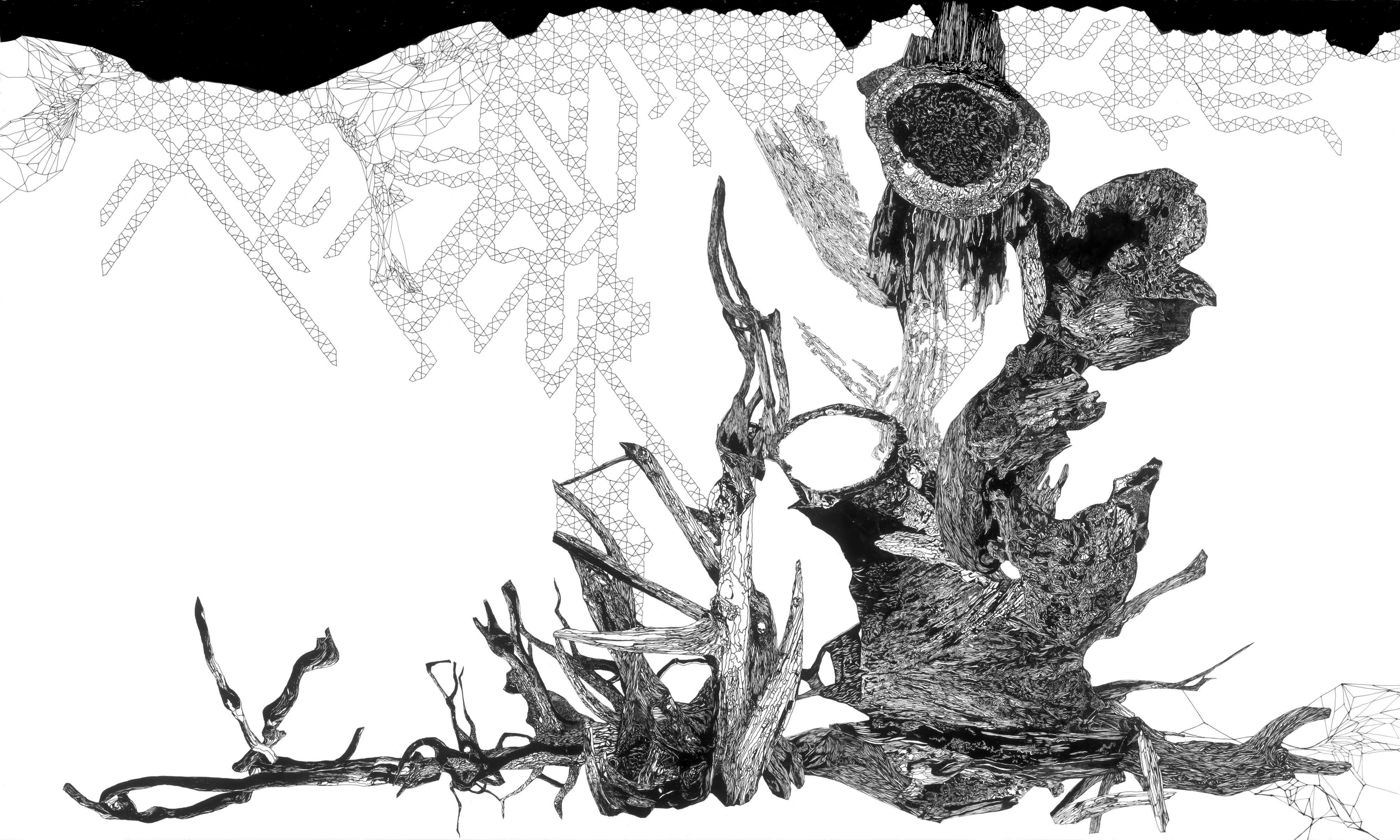 Sarah Ahmad, Fractured Cosmos IV. Organic and geometric patterns intermingle to create an unbounded world constantly in motion without a fully predictable trajectory. This artwork captures the conceptual basis for how Islam appears to me when refracted through issues related to time.

With respect to nominality, the argument is exemplified by the variety of contexts, often mutually irreconcilable in religious thought and practice, that I have highlighted. I believe that to reduce the variety, whether by valorizing some contexts over others, or by forcing coherence across stark differences, is analytically counterproductive. Any conceptualization of Islam based on substance rather than name defeats my purpose by landing us back in the quagmire of orientalist and theological categories that have defined the modern study of Islam since the nineteenth century.

Given the topic’s scope, the book merely scratches the surface of what could have been included in terms of time periods, places, societies, and situations. Time is a matter implicated in all possible human contexts. My hope is that as readers go through the book, reactions to my presentations will generate ideas and engagement with contexts whose details are more familiar to them. Such extension of thought need not be constrained by agreeing with what I have proposed. In many instances, correction and divergence in views offer even better rewards. Moreover, further diversification in situations to be examined would support my view that the nominal approach’s capaciousness makes it the optimal way to thematize Islam.

The nominal approach feeds into the second driving presumption that a historical study of Islam should regard the object as being made by Muslims and non-Muslims alike. Inasmuch as Islam is a name, anyone who posits it as a matter of significance in the world contributes to its creation. In cases I have discussed, positing particular aspects of Islam involves a host of groups: Muslims of vastly different stripes spread over fourteen centuries, Christians, Jews, Hindus, Buddhists, Mongols, European colonial administrators, and scholars of all origins and stripes. This list can be extended by accounting for more cases. Any number of confluences and oppositions pertain to constructions of Islam between people identified in these groups, without essentialization by identity.

The move away from the status of being Muslim pertains also to how we understand a religious tradition. I have underscored a historical perspective in which the tradition is not a solidity but always an argument that occurs among people active at a given juncture in time. Arguments pertaining to Islam have always occurred amid multireligious and multicultural communities. This makes it inadequate to regard the “Islamic tradition” as a closed-off discourse whose focus is presumed to be communication among self-identified Muslims alone.

In diachronic terms, a tradition is always an argument posited imaginatively in hindsight. The sections in the book dealing with particular literature genres substantiate the point that the Islamic tradition amounts to a constantly growing collection of vastly different arguments about past as imagined from varied presents. The impetus for these arguments is invariably the future. The three entangled aspects of time central to this book bear directly on what we can consider a religious tradition understood in historical terms. Given that I see Islam as being made by Muslims and non-Muslims alike, this approach to studying religions counters seeing traditions as exclusive formations. In other words, seen historically rather than theologically, there should be little problem seeing persons as being, for example, simultaneously Muslim and Christian, Muslim and Hindu, and so on.

Jettisoning the primary-secondary distinction when studying Islam has multiple effects. First, this division is a deeply political matter. Through it, historical truths are propounded, whether by academic historians or religious or nationalist ideologues seeking benefits for their own views. The distinction was endemic to orientalists’ conceit that they knew the Orient better than the Orientals. Bracketing the distinction helps us get beyond the orientalist paradigm in a categorical way.

In analytical terms, the variety of Islamic cosmological, epistemological, and sociopolitical perspectives I have discussed speaks to “primary” being an exceedingly coarse and inefficient category. The only reason all these vastly diverse materials and ideas are termed as primary is to reserve a kind of absolute authority in the hands of modern “secondary” historians. This organization of materials has effects that are prejudicial as well as unnecessarily constricting when it comes to understanding human expression in its full complexity under all situations.

My suggestion to remove the primary-secondary distinction does not indicate a free-for-all where everyone gets to produce their own truth. Evidence matters and should be a cardinal criterion for determining the value of propositions. However, as I hope the cases I have discussed show, all projections with respect to the past come burdened with conceptual and ideological baggage. With respect to Islam, modern, non-Muslim scholars create Islam as much as Muslim believers. We also have overwhelming evidence for tremendous traffic between projections about Islam from all manner of sources.

Eliminating the primary-secondary distinction means that all versions of the past can be equally scrutinized. How one judges a version being examined depends on one’s own epistemological and ethical commitments. This approach makes all interlocutors and sources who are made part of the discussion subject to equal regard or suspicion, without automatic privilege.

Constructing pasts, we must dwell on the question of positionality from which representations are made. This requires questioning the hegemony of conventionally authoritative modern methods of writing history.

Where does this book leave us with respect to Islam and time? Compelled to summarize in an instant, I hope to have shown that considering pasts and futures enables us to create an endless array of topics. The offerings of this book can be built upon, and swallowed, as a part of imagining Islamic history as a vast web of interconnected nodes. Like the first sentence of the introduction, the book’s end remains an invitation to examine varied processes pertaining to time, the analytical lens turned as much on the evidence as on our role as interpreters.

History of temporality is a kind of metahistory that illuminates entanglement between observer and observed, subject and object, and time and space. It allows telling multiple stories, all valuable as well as refutable in the same instant. My position on history is, emphatically, not a retreat from ethical responsibility. Indeed, it is a plea to enhance the role of ethical issues. Constructing pasts, we must dwell, under all circumstances, on the question of positionality from which representations are made. This requires questioning the hegemony of conventionally authoritative modern methods of writing history. When claiming to present the past, we should acknowledge the stakes, for ourselves as well as for others who are a part of the conversation. In this context, scholars’ interlocutors are not solely our contemporaries but also all the long-dead authors whose works we scour looking for evidence. Taking this position on history has been, for me, the greatest challenge as well as the reward of academic work.

Related Sections in Other Chapters